Untying is usually easy – but not always! This page explains why shoelace knots sometimes jam when untying, plus gives some tips for preventing such jams.

Why a Knot Jams 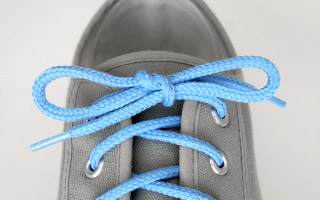 The typical “bowknot” used on shoes has two “loops” plus two “ends – usually one of each running adjacent to each other on either side of the central “knot”. 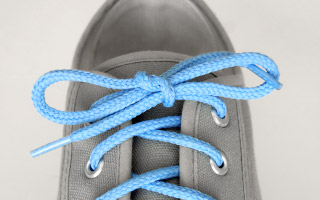 During daily activities, those loops and ends swing around due to foot movements and are rubbed against by trouser legs, table legs, chair legs – just to name a few.

Occasionally, one of those movements will result in an “end” passing into the adjacent “loop”. In this example, the right end has passed into the right loop. 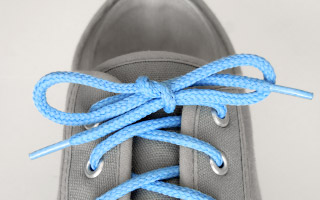 Although this looks innocent, that pass through the loop has effectively formed a loose knot – waiting to be pulled tight! 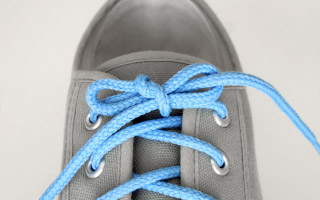 To untie a shoelace knot, people naturally pull both loose ends. Usually this pulls the loops back through the knot until it falls apart – but not if something is in the way.

In this example, both loops have shrunk, but we can see the right loop tightening around the right end that runs through it. 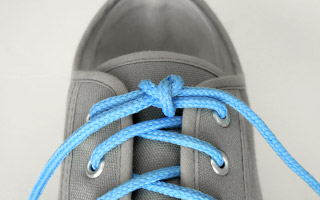 Continue pulling both loose ends and the knot will eventually jam. Make the mistake of tugging harder (to try to loosen it) and you'll get an even tighter jam.

In this example, the left loop has fully disappeared while the right loop has closed tightly around the right end. 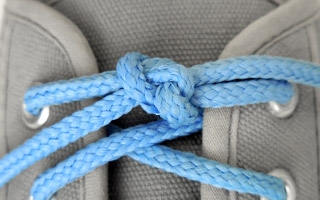 Up close, you can see that this isn't a very complex knot. Usually it can be picked apart with just your fingernails.

However, if you had given it one or two final “loosening” tugs – which instead caused it to become tightly bunched like this – you may need to use a sharp, pointy object to prise it apart.

Although the simplest shoelace knot was used in the above examples, this problem can occur with any bowknot that has adjacent “loops” and “ends”. More than 3/4 of the Shoelace Knots on this website are prone to this type of jamming!

Although rare, it's possible for both ends to have found their way into and through the adjacent loops. One of two things can then happen:

Shoelace knots usually jam due to one end (or sometimes both) having found its way through the adjacent loop prior to untying. No amount of tugging on the ends will un-jam the resulting knot.

Pull only ONE end 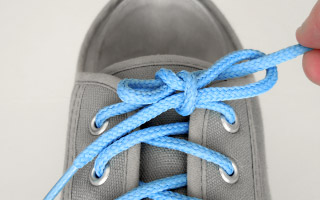 Instead of pulling both loose ends to untie your shoelaces, try pulling only one of the loose ends. 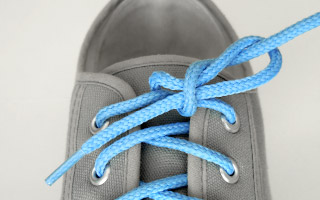 Here's the finished result after the right end has been pulled all the way. The left loop has fully disappeared as usual – but the knot hasn't fallen apart as usual.

Luckily, everything is pretty loose. It's easy to finish the job of untying by simply pulling the right end out of the right loop. 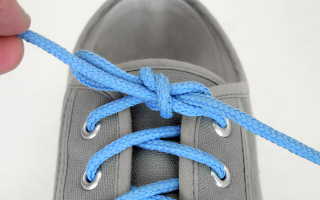 It doesn't matter which end you use for untying. You can pull either end – just don't pull both ends!

In this example, the left loose end is being pulled. At this stage it's still causing the right loop to tighten around the right end – but watch what happens next. 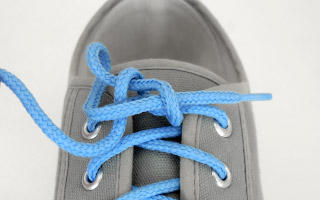 Continue pulling the left end until a magical transformation happens. The right loop gets pulled through the middle of the knot, where it unfurls on the left side. It is now this end that runs loosely through the left loop.

Once again, it's similarly easy to finish the job of untying by simply pulling the left end out of the left loop.

Never pull both loose ends to untie your shoes. Instead, pull either one of the loose ends. Then, if a jam does occur, simply pull apart any remaining loose tangle.

The above solution ensures that the knot will never jam tightly and can always be picked apart easily. But there's also a preventative measure you can take to reduce the chances of a jam even occurring. 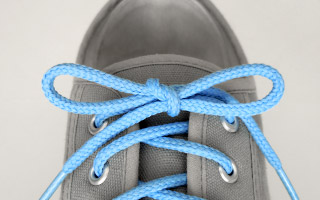 When tying a knot, leave the ends slightly longer than the loops. This makes it less likely for either end to pass into and through the adjacent loop.

In this example, the ends are maybe 1/3 longer than the loops. This is how I usually tie my shoelaces – and as a result, I almost never get a jam when untying.

Always try to leave the ends of your shoelaces protruding a little way past the ends of the loops. Unless, of course, doing so would result in the ends dragging on the ground. It would be pointless to solve one problem and introduce another!

Side-by-side comparison of two shoelace knots – one of which jams when untying – plus the simple solutions.

I've always found it annoying at the end of the day when you pull the strings on your shoes and you end up with a clogged-up knot that you have to pull apart with your fingernails, sometimes in dim light. This doesn't happen most of the time — maybe once in 6-8 times, but it's annoying none the less. Of course, this happens because the shoelace end has passed through the loop on its side, so when you pull the end, the loop tightens down and the shoe doesn't come untied.

So, I decided to tie my shoelaces with a single-loop knot so that both shoelace ends are on the opposite side of the shoe.

First, I tie the first half of a surgeon's knot, just to help keep everything tight while I tie the rest of it. Then I make the usual loop on one side, passing the whole of the free end through the middle. Lastly, I pass the loop through the middle in the opposite direction, and pull tight. Never comes loose, never knots up at the end of the day because the ends, being on the opposite side of the shoe from the loop, never have a chance to go through the loop.

It is just like your “two-stage” knot through Step 6, but then Step 7 would be to wrap the loop around back and pass it through the hole, back to front. Cinch it down, and that's it.

Ian's Reply: The above suggestion by Jack produces a one-loop shoelace knot that's quite different to the two loops of the regular Two Stage Shoelace Knot. However, his point about the loop and loose ends being kept apart on opposite sides of the shoe – which helps prevent the knot jamming when untying – also applies to the “Two Stage Knot” because both loops are kept apart from both loose ends.

Opposite problem – knots that do come untied when you don't want them to.