Do your shoelaces sit crooked? Do you retie your shoes several times a day? These are both signs of a Granny Knot. Learn the “one simple trick” for keeping your shoes neatly and securely tied.

In April 2017, a research paper by UC Berkeley titled The roles of impact and inertia in the failure of a shoelace knot was published by The Royal Society A., Mathematical, Physical and Engineering Sciences.

Even prior to the official launch date of the paper, I was being asked for comment by news services from all over the world. I even participated in two BBC Radio interviews.

At the time of the interviews, the full research paper was still under embargo. All that I had to work with was the limited information in the paper's abstract. Only when the official embargo was lifted (about a day later) was I able to read the actual research paper.

The following is my detailed analysis – and criticisms – of this research.

The researchers' initial observations were that a shoelace knot – particularly one tied with a weak Granny Knot – often came undone fairly quickly while walking. However, that same knot didn't fail if the person either sat on a desk and swung their foot backwards and forwards a similar number of times without ground contact or if they stomped their foot on the ground a similar number of times without any swinging.

This suggested that the interplay of both swinging and stomping forces experienced while running or walking was required for a shoelace knot to untie itself.

Using a high-speed video camera, a person's granny-knotted shoes were filmed while running on a treadmill to observe the mechanics of what actually happened when the knot came undone. This confirmed that the “whipping” of the loops and free ends of the shoelace helped to pull the knot loose.

A test rig was constructed, comprising a pendulum arm with a test knot attached. This arm was repeatedly pulled away from vertical and allowed to swing back to vertical and bump against a “wall”. This was calibrated to bump at about the same g-force as a foot striking the ground while walking (approx. 7 × gravity).

Testing involved repeatedly bumping for a 15 minute period – or until knot failure – and measuring the amount that the ends had slipped from their initial length.

Initially I wondered why their setup was oriented to bump against a wall instead of against the ground. The reason was not stated in the paper, but I'm guessing that this orientation allowed the loops and loose ends to hang downwards, simulating how those of a forwards-moving foot would be orientated ahead of the knot. 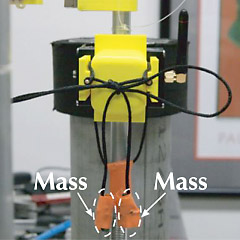 Finally, the knot was tested in various orientations: with the whole knot oriented at either the front of the pendulum or to the side of the pendulum, and with the loops and loose ends oriented either horizontally (“across the shoe”) or vertically (“along the shoe”).

I won't go into the results in detail, as these can be found in full in the published paper. In general, their results quite convincingly corroborated previous “Granny Knot” tests as well as backing up my own advice that excessively long shoelaces are more likely to come untied because the loops and loose ends “flop around” more.

Their other finding – that the directions of both impact and swing influence the untying – is the subject of one of my criticisms, as detailed further below.

What's interesting to me is some of the things that they don't include in their paper:

I have several criticisms of the testing methodology, including lack of scientific discipline, missing important contributing factors, or missing the whole point that “Granny Knots” are the chief cause of shoelace knots coming undone for the average person under normal circumstances (ie. without heavy attachments on the ends of their shoelaces). 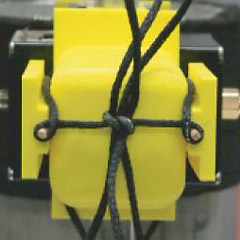 The only published photo of the “weak” knot was one showing the two different orientations (horizontal bow vs vertical bow), part of which I've reproduced at right. As mentioned above, the black shoelaces lacked sufficient contrast to check the construction and placement of the knot. I've therefore Photoshopped the image to enhance the crossovers in the very centre of the knot.

In other words, their knot appears to be mounted on the test rig inside-out, with what is normally the outer, second knot (with the loops and loose ends) instead positioned on the inside and pressing against the yellow knot-mounting block. This would likely produce quite different results than those with the knot correctly mounted.

Compare my photos (below) of a right-over-left and a left-over-right “Granny Knot”, each both normal and flipped, against UC Berkeley's “Granny Knot” photo (above). The photos have been subtly colored to highlight those parts of the knots that are on the outside. 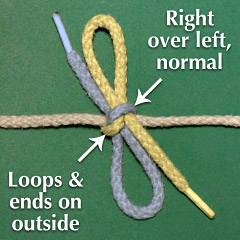 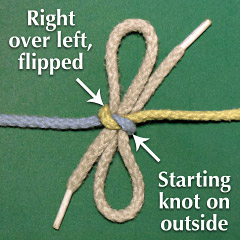 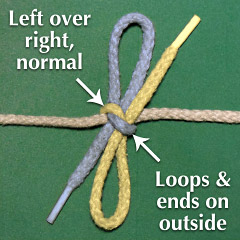 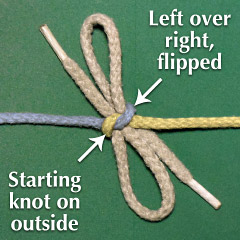 During rear-impact testing, the ends – which are dangling downwards – partly land against the yellow knot-mounting block, altering and shortening their swing. In addition, the ends then collided with the lower part of the metal bar of the pendulum, sometimes arresting their swing and sometimes wrapping around that bar.

During side-impact testing, the ends would have suffered no such interference to their swing. Little wonder that the side-impact test – with its unrestricted end movement – resulted in greater slippage and knot failure using smaller end masses than the rear-impact test.

That said, I actually agree that the direction of impact could well have an effect. It just needs to be tested with fewer potentially interfering variables.

3. Effects From Bottom of Knot Ignored

During each step in a typical shoe, the curvature of both the top of the foot and the shoe upper tend to flatten under load and are restored after push-off. Those curvature changes would in turn alter the angles of the shoelace segments entering the bottom of the knot, changing the knot's shape and friction profile.

However, in the test setup, the lace segments entering the bottom of the knot are kept straight, likely negating many of those important load+release effects. A setup that mimics the change in profile of the shoe upper during load+release could better explore those effects.

Multiple statements from the research paper and press releases indicate the same lack of research:

Quote 1: “We were able to show that the weak knot will always fail and the strong knot will fail at a certain timescale, but we still do not understand why there’s a fundamental mechanical difference between those two knots.”

Quote 2: “While the inferior performance of the weak version is well known in both common knot lore and surgical knot literature [1–4], we have yet to find a proposed structural characteristic to explain the inferior behaviour.”

Quote 3: “This is the first step toward understanding why certain knots are better than others, which no one has really done.”

Quote 4: “There are two ways to tie the common shoelace bow tie knot, and one is stronger than the other, but no one knows why.”

Let's face it, they didn't even ask me – Professor Shoelace! The self-proclaimed world's shoelace expert. Inventor of several different shoelace knots. Whose website ranks #1 worldwide for shoelace-related queries. I would have been happy to answer their questions, advise them in their research or to peer-review their paper.

The fact is, I know exactly why a “weak” shoelace knot comes undone. Here's a brief paragraph that has been – in various forms – on my “Granny Knot” page since 2003 (fourteen years prior to the UC Berkeley study):

In closing, it's not that I'm peeved that they didn't ask my expert opinion – I really do believe that this constitutes a lack of research.

NOTE: I've since created a follow-up video that shows in detail why a “Granny Knot” comes undone.

This latest research by UC Berkeley was interesting to me. It delved deeper and probably with more scientific vigor than most previous research into why shoelaces come undone. The findings mostly bolstered previous findings and anecdotal evidence about “Granny Knots” and excessively long shoelaces.

That said, I feel that their testing was flawed in some areas, lacking in other areas, and that there was too much emphasis on the mechanics of untying rather than on the primary reason that so many people suffer from shoelaces that come undone – the “Granny Knot”.

When people read headlines such as: “Shoe-string theory: Science shows why shoelaces come untied”, or “Mystery of why shoelaces come undone unravelled by science”, they'd like to come away from the story having learned why it happens and – hopefully – how to fix it. An opportunity missed.

Information about the Granny Knot plus the super-simple solution.

Videos demonstrating the Granny Knot plus the super-simple solution.

Check whether you're tying a Granny Knot via my interactive analyser.

Granny Knot versus treadmill experiment on a German TV program.

Excerpts from visitors' e-mails & testimonials about the Granny Knot.

The first stage of tying a regular shoelace knot.