Also known as the “Bunny Ears” shoelace knot (due to its two loops) or as the “Bowknot”. Make a loop with both ends, then simply tie a knot with them. It's often tied incorrectly, resulting in an un-balanced Granny Knot. 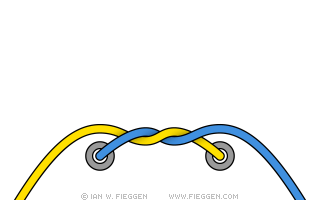 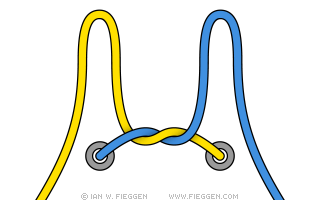 Make both ends into “loops” by simply doubling them back onto themselves. People often refer to these as “Bunny Ears”. 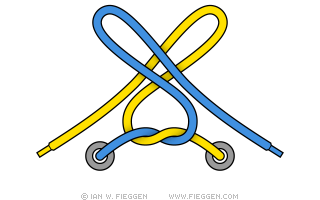 Cross the right (blue) loop over the left (yellow) loop so that the blue loop sits in front and is now the left loop. 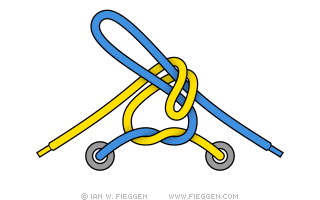 The yellow loop is now the right loop. Begin to wrap that loop around the left (blue) loop to end up in front. 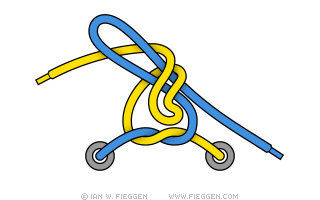 Start to push the right (yellow) loop into the “hole” below the two loops. This is really the same as if you were tying a regular shoelace knot except that you are working with a pre-formed loop instead of forming the loop on the way through. 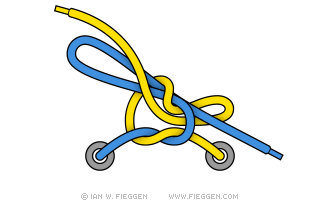 The right (yellow) loop comes out through the back of the hole. 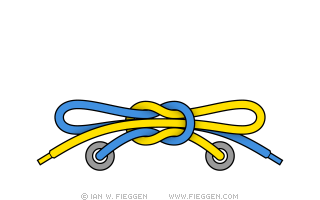 Grab hold of both loops and pull tight to complete the knot. Notice that the loose end of the right (yellow) loop drops back down to the front left, making the finished knot exactly the same as if you'd used the regular one-loop method.

Alas, it's very common for this knot to be tied incorrectly (see “Granny Knot Warning” below).

Kids find it easy to learn this shoelace knot because the technique is so similar to the simple “half-knot” that they probably already know. Tie one half-knot (the Starting Knot), then form the ends into loops and tie a second half-knot (the “Finishing Bow”).

Naturally, people tend to tie both of those stages in the same direction. For example, tying the starting knot Left-over-Right, then also tying the finishing bow Left-over-Right. Unfortunately, this results in an un-balanced “Granny Knot”, which sits crooked and comes undone more easily.

It's important to know that the two stages of the knot (“Starting Knot” and “Finishing Bow”) must be tied in opposite directions in order for the completed knot to be “balanced”, which means it will sit straight and stay secure.

When teaching the Two Loop Shoelace Knot in particular, it's CRUCIAL to understand and teach this extra detail.

A second, unrelated problem is that older children and adults will often be teased for using this “Two Loop” technique. It has long been thought of as a “kiddie's knot” – despite it being a perfectly good method if done correctly.

In fact, the “One Loop” and “Two Loop” techniques produce the identical outcome (as demonstrated in this video).

It may take another generation before everyone learns and accepts this fact. Until then, older people using the “Two Loop” technique will likely be teased.

This knot appears in The Ashley Book of Knots as #1212 and #1214, “The Bowknot”, where it is described as “... the universal means of fastening shoe-strings together.”

This name refers to the story that is often used to help children remember the steps:

As far as I know, there is no actual “bunny ears” shoelace tying song or rhyme. Instead, it was only ever told as a simple story.

This name originated in 2000 in the children's cartoon series “SpongeBob SquarePants”. The episode Your Shoe's Untied includes a catchy song (written by the band “Ween”) titled “Loop de Loop” (optionally “Loop dee Loop”, as seen in the cartoon).

The actual tying method is never clearly shown, so it's impossible to verify that it refers to the Two Loop Shoelace Knot. The only clues are the two occurrences of “Loop” in the title plus the lyrics mentioning: “Like bunny ears or a Christmas bow”.