Simplified variation of Straight Bar Lacing where one end runs straight from bottom to top while the other end steps through the eyelets. 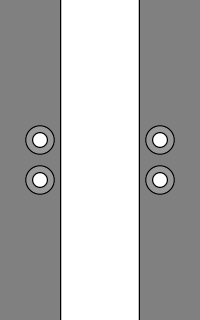 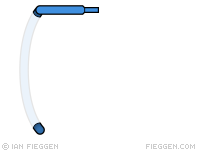 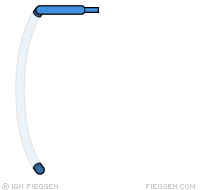 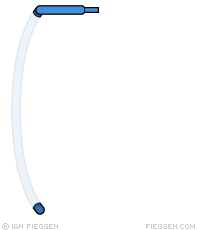 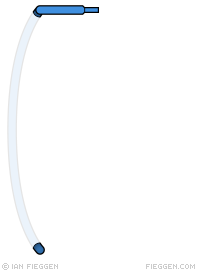 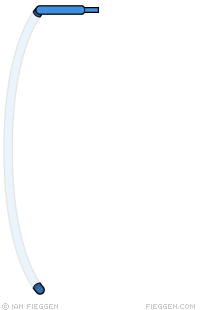 • The left (blue) end runs all the way up the inside and out through the top left eyelet.

• The right (yellow) end runs straight up on the inside and out through the next higher eyelet, then straight across on the outside and in through the adjacent eyelet on the other side. Repeat until the end reaches the top right eyelet.

• The left (blue) end runs all the way up the inside and out through the top left eyelet.

• The right (yellow) end runs straight up on the inside and out through the next higher eyelet, then straight across on the outside and in through the adjacent eyelet on the other side. Repeat until the end reaches the second-from-top eyelet.

• At the second-from-top eyelet, run straight across on the outside, then straight back on the inside before tucking under the vertical shoelace segment inside the shoe (similar to the tucked segments of Ladder Lacing).

• Continue straight up on the inside and out through the top right eyelet.

Even no. of eyelets = neat

Odd no. of eyelets = messy

Just like Straight Bar Lacing, Straight Easy Lacing only works neatly on shoes with even numbers of eyelet pairs (eg. 8 pairs = 16 eyelets). This is because the shoelace must cross the shoe an even number of times so that the ends meet in the middle and can be tied together.

Like other straight lacing methods, Straight Easy Lacing has an additional benefit for sporting or military use: The upper horizontal sections of shoelace can be quickly cut through with a knife or scissors in order to more easily remove a boot from a broken, sprained or otherwise injured ankle or foot.

• Figure 2-2-6 includes variations for 3, 5 or 7 pairs of eyelets, each of which requires an odd workaround, and for which the One Diagonal workaround has been implemented.

Uses the “one crossover” workaround for seven pairs of eyelets.

Only the lower six eyelets have been laced.

The bars create curved reflections in the shiny background.

For a neat finish, David ran the shoelaces vertically through the top eyelets, hiding the ends.

I love the wide, patterned shoelaces!

This first diagram shows the simplest solution for being unable to tie naturally – don't tie the ends at all, instead tucking them into the shoe at the bottom-left and top-right eyelets.

For a tighter fit, you could also permanently anchor the ends inside the eyelets, either with simple stopper knots or using Lace Anchors.

As shown in more detail in the main lacing diagram above, the second-from-top straight section runs straight across from right-to-left (on the outside), then left-to-right (on the inside), tucking under the vertical section on the right side. The inner straight section is fairly well hidden by the outer straight section, especially with flat shoelaces. Contributed by Jeremy J.

Use a single diagonal somewhere in the lacing. At the top, it's less noticeable due to the loops and loose ends. (This is the method favored by the Canadian Military). At the bottom, if can even be run around the inside of the tongue to hide the diagonal, though at the expense of some slight discomfort. Near the middle, a diagonal may be positioned to line up with and run through a tongue centering loop (if the shoe has one).

Instead of trying to hide a single diagonal, this alternative makes a feature out of a single crossover, similar to the look of Roman Lacing. This crossover can be placed at either the top or bottom of the lacing, but unlike the above “One Diagonal” variation, it cannot be placed in the middle of the lacing.

Like a squashed version of the above “One Crossover” variation, both ends run straight across one pair of eyelets and feed a second time through the opposite eyelets. Near the top, it's less noticeable due to the loops and loose ends. Near the bottom, any difficulty with tightening or loosening this section is not so noticeable as the shoe doesn't need to open wide at that point.

Lace normally up to the second pair of eyelets from the top, then finish with a High Lace Lock through the top two pairs of eyelets. Although this doesn't look as neat, it does pull the lacing extra tight.

So, I learned Straight Easy Lacing decades ago in a Canadian Reserve training program, and have occasionally thought of using it again. One quick question: Is there any reason that the workaround crossover for odd numbered eyelets couldn't be down at the toe end of the shoe? Seems to me that it would be a bit tidier that way. Anyway, I'm off to find a pair of shoes with an odd number of eyelets to find out.

Ian's Reply: The crossover can be at the bottom, which is mentioned (but isn't illustrated) in the “One Crossover” workaround above.

Here at Esquire magazine we have been recently charmed and inspired by your shoe lacing website and I wanted to ask your opinion on straight lacing. You call what I would call the conventional Northampton lacing system (one lace end straight up the side and the other doing all the threading) the “lazy” version of straight lacing.

So is the “lazy” term your nomenclature or is it something you got from elsewhere? Of course its is simple than the other methods but why does that make it lazy?

Ian's Reply: Shortly after the above e-mail, this lacing method was renamed from “Straight Lazy Lacing” to “Straight Easy Lacing”.

Hey, thanks for the quick response!

I tried the Straight Lazy Lacing (Slightly modified so I can tie the knot on the inside of the shoe, I hate having the knot on the outside), and it seems to be working a lot better. It's not bunching as much, and it's only doing it on one side (The side with the lace going straight up.).

My Mom called me to tell me she changed her laces and couldn't figgure ot how to re-lace them (straight lazy lacing style). She had tried ALL DAY to figure it out w/out success. I laughed and then surfed the web for cool ways to tie shoes and found your site. My Mom is ecstatic! You're now in her favorite's for websites! She lives in NYC and I live in LA!

Identical looking method with both ends progressing through eyelets.

Similar method that follows the same path but is tied off using only one end.