Ever wondered how shoelaces are made, or what's inside? This section explains the various materials, shapes, weaves and other factors that go into the different types of shoelaces. 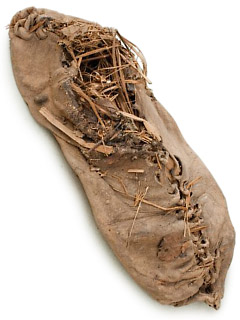 Shoelaces have evolved considerably over the tens of thousands of years since early humans first strapped coverings onto their feet. Two of the oldest surviving examples are the 5,500 year old leather “lacing” found on the Areni 1 Shoe (pictured) and the 5,300 year old lime bark “shoe strings” found on the shoes of Otzi the Iceman.

For most of their history, shoelaces have consisted of natural materials (eg. cotton, flax, hemp, jute, linen, sisal), which were simply twisted or braided together into reliable strands of useable lengths. Evolution was slow until the industrial revolution triggered the first major developments in materials and construction.

When synthetic fibers such as Nylon were first developed in the 1930s, they were fairly quickly adopted in the manufacture of shoelaces. These smooth new fibers had several advantages:

On the downside, the reduced friction of synthetics meant that they didn't hold a knot as well as their natural counterparts. Synthetic shoelaces looked great and lasted longer – but they also came loose more easily!

Most shoelaces today are made from the following materials, either individually, blended, or with threads of different materials interspersed:

There are many different manufacturing processes for shoelaces. I'd like to eventually add several of them here! For now, let's begin with the braiding process.

Many of us are familiar with “braiding” (or “plaiting”) hair or string, using as few as three strands. Shoelaces take this simple, ancient process to the next level.

This diagram shows a dozen strands of one color (yellow) running in one direction (left-to-right) and a dozen strands of another color (blue) running in the opposite direction (right-to-left). Each time the strands meet, they dodge past each other, first one way (blue strands in front) then the other (yellow strands in front), forming an angled weave.

Although this image is flat, imagine lifting it off the screen and wrapping it so that the left and right sides are joined to form a hollow vertical tube. The yellow strands that reach the right side wrap around to the left side – and vice-versa for the blue strands. The two sets of strands run in opposite directions around the tube, forming a braided “tubular” weave.

The resulting “tube” of material is then generally ironed flat to form a double-walled flat shoelace.

Alternatively, the tubular braid can be formed around an additional solid core, commonly made of a bundle of strands of rough material. The result is a firm shoelace that holds its round shape, has greater strength and has less stretch. On the downside, the material doesn't compress as easily, thus they don't hold a knot as securely. 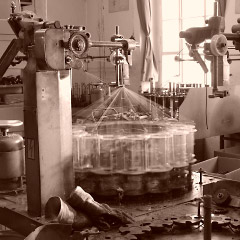 Machines for creating “tubular braided” shoelaces have been around since the 19th century. It's said that the inventor of the first such machine was inspired by watching a Maypole Dance. Such machines are therefore known as “Maypole braiders” (or “circular braiders”).

I've always been fascinated by complex machines. The ones that make braided shoelaces are particularly fun to watch!

The spools of thread run in a weaving, circular path around the base of the machine. The threads emerging from the top of each spool initially pass quite loosely to the left and right of each other. All of those loosely braided threads are then drawn ever more tightly together as they converge at the top of a “cone” of threads. There, the tightly braided shoelace material is continuously drawn off.

Again, machines for creating “flat braided” shoelaces have been around for at least 200 years.

Despite their age, some of these antique braiding machines are still working today! To see them in action – and even buy the resulting shoelaces – check out The Shoelace Factory, part of the City Museum in St Louis, USA. 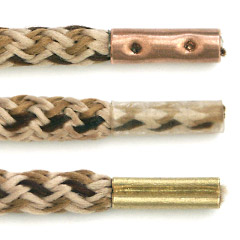 Having made a continuous length of shoelace material, the final step is to chop it into standard lengths and add the tips, which are called “aglets”.

This website has a separate page with additional information about aglets, including a large section with eight different tutorials on home-made aglets.

Additional information about the tips of shoelaces, called “Aglets”.