Commonly used on moccasins and slippers, this knot is decorative only and does not hold tight. Two loops are crossed at the middle, then secured with a simple overhand knot. 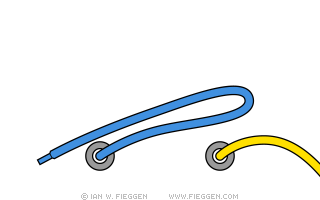 Unlike almost all other shoelace knots, the Moccasin Knot does not begin with a Starting Knot. Instead, the left (blue) end is formed into a “loop” by simply doubling it back onto itself. 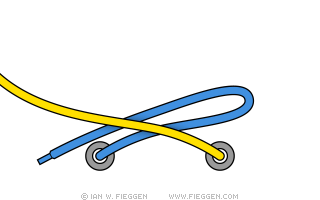 Cross the right (yellow) end over to the left, passing in front of the left (blue) loop. 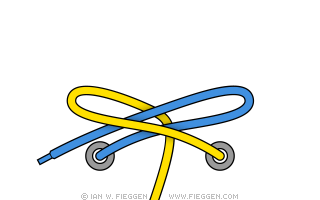 Continue the right (yellow) end around the left loop to end up at the back between the two loops. 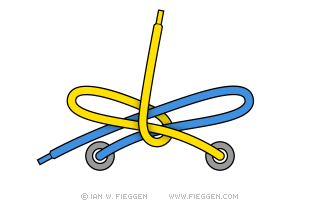 Feed right (yellow) end under the bottom and begin to wrap around the front. 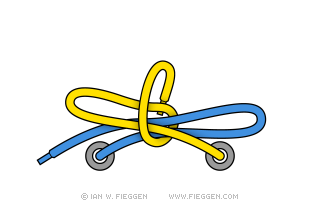 Continue right (yellow) end over the top and wrap around the back. 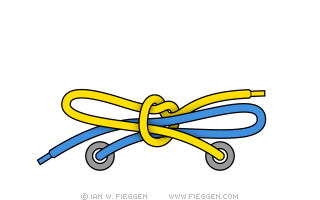 Tuck the right (yellow) end under the previously formed loop to create an overhand knot, with the loose end positioned alongside the right (blue) loop. 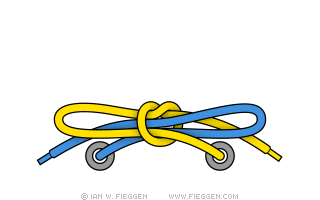 I've seen other Moccasin Knot tutorials that begin by creating two separate loops, then crossing one loop in front of the other. Most of these techniques result in a finished knot with one loose end towards the front and the other towards the back. This just looks wrong!

Instead, the instructions on this page carefully form the second loop around the first loop rather than simply crossing in front. This ends up with both loose ends correctly positioned at the front of the finished knot, resulting in a more visually pleasing “mirrored” symmetry. It just looks right!

Unlike most other shoelace knots, which typically hold the sides of a shoe closed, the Moccasin Knot does not hold tight. In fact, once the knot is tied, the middle of the knot can simply be pulled away from the shoe. It's thus purely a decorative knot, often adorning the front of slip-on shoes like moccasins or slippers.

Of course, the Moccasin Knot can be used on other shoes – as long as you're okay with it being completely loose.

Yet another decorative knot, which holds a little more tightly.