My own Ian Knot (yes – I'm the inventor) is the World's Fastest Shoelace Knot. Make a loop with both ends and simultaneously pull them through each other to form an almost instant knot.

The finished Ian Knot is identical to both the Standard Shoelace Knot and the Two Loop Shoelace Knot. In fact, all three of these form exactly the same finished knot, which appears in The Ashley Book of Knots as #1212 and #1214, “The Bowknot”, where it is described as “... the universal means of fastening shoe-strings together.”

The Ian Knot therefore isn't technically a new “knot”, rather it is a new “technique” or “method”, which differs only in the manner and speed of tying. The finished knot is just as secure and just as easy to untie.

To those familiar with knot theory, it also isn't a new knot from a topological perspective. (I'd never even heard of “knot theory” when I first named it the Ian Knot).

The core of my technique is almost identical to that used in the “Tom Fool's Knot”, which is a similarly “instant” knot that is instead tied in the middle of a length of rope, using the whole hands instead of just the fingertips. The Ian Knot could be described as a more intricate variant of the “Tom Fool's Knot”. 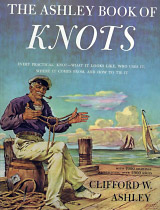 While the “Tom Fool's Knot” is described in various knotting books, the definitive reference The Ashley Book of Knots even has a picture on the front cover of an old sailor tying a “Tom Fool's Knot” (as seen at right).

Note that the “Ashley Book of Knots” has some inconsistencies. The “Tom Fool's Knot” is shown as both #1141 and in more detail as #2534, the final illustration of which is actually that of the “Handcuff Knot”, which in turn is shown as #412, #1134 and #1140, and which uses the same core technique as my Crossed Ian Shoelace Knot.

Naming It The “Ian Knot”

As a 20 year old, there was undoubtedly some ego involved in naming this technique after myself. But the primary motivation was not ego but rather that “Ian” is a short, simple, easy to spell and thus easy to remember name (unlike my surname “Fieggen”).

Since publishing my instructions on-line, I've received the occasional e-mail from other people with similar techniques – although most of them had confused the Ian Knot with the very similar looking Two Loop Shoelace Knot. I'm humble enough to accept that I am perhaps only one of many to have independently come up with similar methods.

However, I have yet to discover any prior name for this technique. Books about knots have been around for centuries. Many such books include shoelace knots – yet I have never seen this technique in any book. Perhaps I'm simply the first person to have named my invention, documented the procedure and actively and freely shared it with the world?

I challenge anyone to show me any publication of this technique in any book or elsewhere prior to my own first illustrations in Jun-1982 and subsequent distribution efforts. Until I'm shown a prior name, I maintain my right to have named it the “Ian Knot”.

My Own Technical Observations

How Does It Compare To Regular Shoelace Knots?

When I first invented the Ian Knot, I was curious to see how it differed from the tried and tested conventional knot that I had been using until then. For several months, I tied one shoe the old way and the other shoe with my new Ian Knot. This led to the following conclusions:

Every knot has its own peculiarities that have to be overcome in order to learn how to tie it tightly. With the Ian Knot, the simultaneous inward movement from both sides makes it harder to maintain outward tension on the Starting Knot. Also, neither hand has a finger free to hold things in place, as is often done with other knots.

When learning, it's natural to begin with large loops to allow for easier manipulation. After gaining confidence, start using progressively smaller loops. This helps in many ways, some of which will only become apparent when you actually try them:

The above tips are demonstrated in the following short tutorial video:

Keeping the loops small and tight helps maintain tension in just the right way to keep the Ian Knot tight from start to finish.

While practicing the Ian Knot, one useful measure is to tie a Double Starting Knot, which helps keep everything tight while working on the technique. It's sort of like using “Training Wheels” until the Ian Knot has been mastered, after which the regular Starting Knot can once again be used.

The Ian Knot is faster than either of the traditional ways of tying shoelaces. Period!

I've been practising my Ian Knot for several decades. In addition, I'm using a reversed Ian Knot with the ends pulled through to tie my Starting Knot more quickly. This combination takes me about 2 to 3 seconds – depending on the particular shoelaces.

I've also been practising the regular “Starting Knot” followed by either the Standard Shoelace Knot or the Two Loop Shoelace Knot. Either of these combinations take me about 3 to 5 seconds – again depending on the particular shoelaces.

I'm therefore saving 1 or 2 seconds per knot – depending on the shoelace. At the absolute minimum, the Ian Knot is at least 1 second faster.

Is it really worth learning the Ian Knot just to save 1 second compared to a regular shoelace knot? Let's see how those seconds add up:

Of course, those 58,400 individual seconds can never be combined into one continuous usable chunk of 16 hours. But considering that most people think of shoe tying as a chore, it's pretty cool to spend that much less time doing that particular chore over the course of their lifetime.

Besides – to me – the Ian Knot has transformed the chore of shoelace tying into something fun. I still get a kick out of tying it!

Full Instructions for the Ian Knot.

Brief History of the Ian Knot.

Visitors' Feedback for the Ian Knot.

Enhanced, more secure variation of this knot (much trickier).