My own Ian Knot (yes – I'm the inventor) is the World's Fastest Shoelace Knot. Make a loop with both ends and simultaneously pull them through each other to form an almost instant knot. 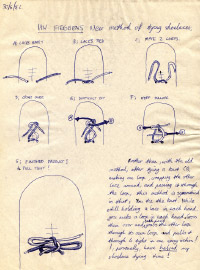 The birth of the “Ian Knot”

One morning, after breaking yet another shoelace, I noticed that it always seemed to be the right end of my lace that broke. Because the regular method of tying shoelaces is not symmetrical, I figured that the end that experiences the most movement simply wears out more quickly.

When I examined the knot and found that it could be made symmetrical, I discovered quite by accident that the resultant technique was also much faster, as a lot of time was saved by working with both hands simultaneously.

Having mastered the new technique myself, I then set about teaching anyone else who was interested. I guess I'm one of the few people who can claim to have taught their parents to tie their shoelaces! Mostly, it was shown to friends and relatives and the occasional shoe-shop assistant. 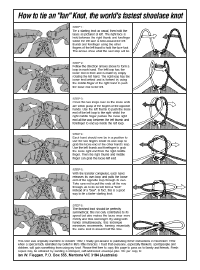 After a decade of teaching the Ian Knot to countless people in person, I finally decided to make a set of printed instructions that people could take home and study at leisure or copy and pass on to others. I drew illustrations of the six steps required, both “hands-on” and diagrammatically, accompanied by detailed step-by-step instructions.

Over the next few months I handed these out to many people. With their feedback, I gradually fine-tuned the diagrams and instructions until the final draft in May-1993. I then had 1,000 copies printed – this turned out to be more than I would hand out in a lifetime!

This was still in the days before most people had software like “Windows” on their computers, making it difficult for them to view a simple video. I therefore captured 32 frames from a video of my Ian Knot, then wrote a tiny yet powerful MS-DOS program to display the resultant animation, complete with nine speed settings plus controls to step backwards or forwards one frame at a time. In fact, it turned out to be quite a good way to demonstrate the Ian Knot.

The resulting program was uploaded to various computer bulletin boards around the world, as we did in those days before the Internet made such things easy.

In order to make it smaller and more attractive to download, I compressed the video data by creating a static background image of the underlying shoe, then painstakingly erasing the background data from each frame of the animation, leaving only the fingers, laces and shadows. The resultant file was over 40% smaller – quite an achievement.

This was still the early days of the Internet and geeks like me were only just beginning to put stuff online. I took my original drawings from 1992, colored them in for a fresher look, and created my first Ian Knot web page. This was uploaded to my personal website and thus made available to the world via the Internet.

Some new video editing software enabled me to create a decent MPG video complete with sound track and subtitles. This one-minute-long video showed the Ian Knot at normal speed and in detail as well as the two other most common shoelace knots for comparison.

NOTE: This video was on the internet five years before YouTube even existed!

With slow, dial-up modems still the predominant mode of connecting to the Internet, my original 9Mb video was too big for many people to download. I therefore created three separate movies – one detailing the Ian Knot (only 1.2Mb), with the other two (0.5Mb and 0.6Mb) showing each of the other common techniques. These were faster and easier to download and also had larger, clearer subtitles.

Following a suggestion from a website visitor, I re-drew the Ian Knot diagrams to show the shoes viewed from the same overhead perspective as the videos, which more closely represents how a person would see their own shoes while tying them.

The 20th anniversary of the Ian Knot in 2002 plus an article about shoelaces in “Nature” magazine provided the impetus to expand my single Ian Knot page into a multi-paged Ian's Shoelace Site. This allowed me to begin adding more comprehensive instructions on other known shoelace knots, which in turn sparked the expansion into other aspects of shoelaces.

Advances in visitors' computer capabilities, steadily falling bandwidth costs plus the 2005 launch of YouTube have allowed me to gradually release more videos covering different aspects of the Ian Knot. Everything from a brief, five-second-long demonstration to a detailed, five-minute-long tutorial, even a one-handed variation.

Future of the Ian Knot

We've just passed the 40th anniversary of the Ian Knot. Sadly, I've come to the realisation that millions of people don't seem to know that I created this knot – or even that the knot has a name. I named it the “Ian Knot” not because I'm particularly egotistical but because I figured that “Ian” was easy to remember and spell. Alas, many reposts of my knot don't even mention it by name.

For example, searching YouTube in May-2017, I found over 400 videos titled “fast shoelace knot” or “tie shoes fast” or similar. Less than half of them even mentioned Ian Knot, while almost none of them linked to the source. Attribution doesn't seem to be common courtesy nowadays.

Worse, nearly half of those videos were inadvertently teaching the knot incorrectly, resulting in an un-secure Granny Knot, which sits crooked and comes undone more easily. This is giving the Ian Knot an undeserved reputation as being fast at the expense of being unreliable – which is simply untrue!

I hope that people are able to verify for themselves the true history of this knot, learn how to tie it correctly and securely, and have the courtesy to use my original title when sharing it with others. The future of the “Ian Knot” is in your hands.

Full Instructions for the Ian Knot.

Technical Info for the Ian Knot.

Visitors' Feedback about the Ian Knot.

Enhanced, more secure variation of this knot (much trickier).