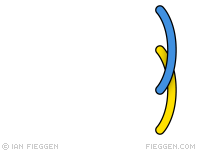 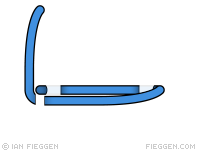 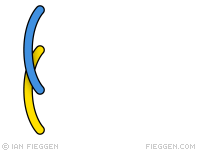 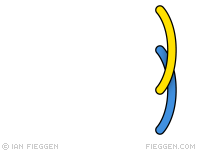 • The left (blue) end runs straight up on the outside, then straight across on the inside.

• Both ends run straight up on the outside, each skipping one eyelet and feeding in two eyelets higher up.

• Both ends continue straight across on the inside and out through the adjacent eyelets.

• Alternate running up on the outside and across on the inside until the ends emerge through the top and second-from-top eyelets on the same side.

• The left (blue) end runs straight up on the outside and in through the next higher eyelet.

• The right (yellow) end runs straight up on the outside, skipping one eyelet and feeding in two eyelets higher up.

• The left (blue) end runs straight across on the inside, then straight back on the outside before tucking under the previous vertical shoelace segment (similar to the tucked segments of Ladder Lacing).

• The left (blue) end then continues straight up on the outside, skipping one eyelet and feeding in two eyelets higher up.

• The right (yellow) end runs straight across on the inside, then straight up on the outside, skipping one eyelet and feeding in two eyelets higher up.

• Both ends run straight across on the inside and out through the adjacent eyelets.

• Both ends continue straight up on the outside, each skipping one eyelet and feeding in two eyelets higher up.

• Alternate running across on the inside and up on the outside until the ends emerge through the top and second-from-top eyelets on the same side.

The “inside-out” layout may look weird – but it gives this lacing several important benefits:

In addition, tying the knot at either top-left or top-right then gives this lacing two different and distinct applications (see below).

Hiking / Biking Lacing only works neatly on shoes with even numbers of eyelet pairs (eg. 8 pairs = 16 eyelets). This is because the shoelace must cross the shoe an even number of times so that the ends will meet and can be tied together.

Using This Lacing for Hiking / Bushwalking

Lace one shoe as above and the other shoe in reverse, with both knots positioned towards the inside (between the ankles). This places the loops and loose ends further away from the outer sides of the shoes, making them less likely to become snagged in undergrowth while hiking / bushwalking.

Using This Lacing for Biking / Cycling

Lace one shoe as above and the other shoe in reverse, with both knots positioned towards the outside. This places the loops and loose ends further away from the bicycle chain, cranks and other moving parts.

Includes a single crossover to make better use of the tongue centering loop.

Close-up showing the “across and back” variation for odd numbers of eyelet rows.

Laced for cycling, with the lower section segmented to make the shoe fit more snugly.

Clearly shows how the shoelace ends exit at the sides.

Unusual variation with knots near the little toes.

This inside-out lacing was done to stop friends asking how to straight lace.

Kevin prefers the loops & ends on the outside.

A great photo of this lacing method!

This first diagram shows how the ends don't meet naturally, instead ending up diagonally opposite each other. This defeats the whole concept of this lacing, in which the ends are intended to be tied at the side of the shoe.

As shown in more detail in the main lacing diagram above, the second-from-bottom straight section runs straight across from left-to-right (on the inside), then right-to-left (on the outside), tucking under the vertical section on the left side. Contributed by Jeremy J.

Use a single diagonal somewhere in the lacing, such as shown here at the very bottom. Near the middle, a diagonal may be positioned to line up with and run through a tongue centering loop (if the shoe has one).

Instead of trying to hide a single diagonal, this alternative makes a feature out of a single crossover, similar to the look of Roman Lacing.

Unlike the above “One Diagonal” variation, the crossover cannot be placed in the middle of the lacing.

Like a squashed version of the above “One Crossover” variation, both ends run straight across one pair of eyelets and feed a second time through the opposite eyelets. Being near the bottom, any difficulty with tightening or loosening this section is not so noticeable as the shoe doesn't need to open wide at that point.

For a neater (though slightly less comfortable) variation, the lacing can be done inside-out, with only the top two horizontal sections fed under the sides of the shoes to emerge through the top and 2nd from top eyelets (where the knots will be tied). This is effectively a side-knotted version of Straight Bar Lacing.

Inside-out variation looks neater when the sneakers have contrasting shoelaces.

This picture, sent to me by Stephen P., shows some shoes laced with inside-out Hiking / Biking Lacing, with the knots and loose ends positioned towards the outside for biking / cycling.

The result is much neater, particularly when the sneakers have contrasting shoelaces, which would otherwise look messy with the vertical sections visible on the outside. However, it no longer has the benefit of even pressure distribution because the straight horizontal sections are now on the outside.

The hiking/biking lacing is really useful. I've not had an issue with my laces getting caught in my gears since, even though the ends are longer than they used to be! They're real easy to tighten, too. Perfect lacing, at least for my shoes.

I'm very happy I found your instructions for Hiking/Biking lacing.

When tying my motorcycle boots I always tuck the loops and loose ends of the knot under the “horizontal bits of lace” (do those have a name?) to avoid getting a loop stuck around the foot-clutch on the left or the rear-brake on the right.

When riding this is not a problem, but when you stop it is. I've seen two friends of mine stop at a traffic light, tilt to one side, move one foot to the floor to stand on but fall on the asphalt instead because their lace was stuck to the motorcycle... With this technique I can thoughtlessly tie my laces without the fear that one day I probably will forget to tuck them and fall too.

When your appearance on “Going Deep with David Rees” aired I visited it again to read about lacing patterns because you brought up hiking/biking lacing. Although hiking isn't in the equation, I thought it would help me, and it does.

For a stiff, paunchy old man such as I, bending forward to tie or untie my shoelaces while my toes point away from me is not so easy and usually requires sitting on a staircase. If I'm in a chair or on the side of my bed, it's far easier to reach my foot by putting it up across the other knee, but then the inner side of the shoe, not the upper side, is facing me. Having the ends of the lace and the knot on the inner side of shoe, as for hiking, lets me see what I'm doing.

Extremely Comfortable – the eyelet tabs are held away from the foot, and the ladder lacing is next to the tongue giving even pressure.

Looks a little weird to the un-initiated

Taught to me by a friend who was in the British military – said they use it on especially long hikes to protect against blisters.

Identical method done inside-out, which hides the knot on the inside.