A variation of Straight Bar Lacing with the knot hidden on the inside, resulting in a distinctive look for trendy shoes or dress shoes alike. 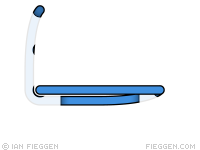 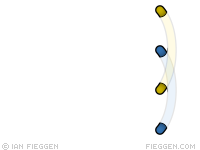 • Alternate running up on the inside and across on the outside until the ends meet between the top eyelet and second eyelet from the top.

• Carefully tie the knot inside the shoe at that point. This can either be tied with a Standard Shoelace Knot or with a simpler knot like a Reef Knot (as shown in the diagram above).

• Finally, tuck the ends into the shoe.

• The left (blue) end runs straight up on the inside and out through the next higher eyelet.

• The right (yellow) end runs straight up on the inside, skipping one eyelet and feeding out two eyelets higher up.

• The left (blue) end runs straight across on the outside, then straight back on the inside before tucking under the previous vertical shoelace segment (similar to the tucked segments of Ladder Lacing).

• The left (blue) end then continues straight up on the inside, skipping one eyelet and feeding out two eyelets higher up.

• The right (yellow) end runs straight across on the outside, then straight up on the inside, skipping one eyelet and feeding out two eyelets higher up.

• Both ends run straight across on the outside and in through the adjacent eyelets.

• Both ends continue straight up on the inside, each skipping one eyelet and feeding out two eyelets higher up.

• Alternate running across on the outside and up on the inside until the ends meet between the top eyelet and second eyelet from the top.

• Carefully tie the knot inside the shoe at that point. This can either be tied with a Standard Shoelace Knot or with a simpler knot like a Reef Knot (as shown in the diagram above).

• Finally, tuck the ends into the shoe.

• Any discomfort that may be caused by the knot and loose ends being tucked into the shoe can be reduced by positioning the knot towards the outer side of the foot.

• If you will be slipping the shoes on and off rather than tying and untying each time, Lace Anchors can be used to permanently secure the ends instead of tying a knot.

Hidden Knot Lacing only works neatly on shoes with even numbers of eyelet pairs (eg. 8 pairs = 16 eyelets). This is because the shoelace must cross the shoe an even number of times so that the ends will meet and can be tied together.

Like other straight lacing methods, Hidden Knot Lacing has an additional benefit for sporting or military use: The upper horizontal sections of shoelace can be quickly cut through with a knife or scissors in order to more easily remove a boot from a broken, sprained or otherwise injured ankle or foot.

Neat look for the dress shoes of an Air Force ROTC Cadet.

Empty top eyelets expose the logo plus make the shoes easy to slip on and off.

Both bright colors stand out well against the white sneakers.

Minimal lacing allows more of the Argyle pattern to show through.

Another photo from John, this time of Hidden Knot Lacing.

Great idea to hide the knots & loose ends so they don't obscure the pictures.

A hidden knot is the only way to achieve this neat effect.

I wonder if Ian used a hidden Ian Knot?

This first diagram shows how the ends don't meet naturally, instead ending up diagonally opposite each other. This defeats the whole concept of this lacing, in which the ends are intended to be tied at the side of the shoe where the knot can't be seen.

As shown in more detail in the main lacing diagram above, the second-from-bottom straight section runs straight across from left-to-right (on the outside), then right-to-left (on the inside), tucking under the vertical section on the left side. Contributed by Jeremy J.

Use a single diagonal somewhere in the lacing, such as shown here at the very bottom. Near the middle, a diagonal may be positioned to line up with and run through a tongue centering loop (if the shoe has one).

Instead of trying to hide a single diagonal, this alternative makes a feature out of a single crossover, similar to the look of Roman Lacing.

Unlike the above “One Diagonal” variation, the crossover cannot be placed in the middle of the lacing.

Like a squashed version of the above “One Crossover” variation, both ends run straight across one pair of eyelets and feed a second time through the opposite eyelets. Being near the bottom, any difficulty with tightening or loosening this section is not so noticeable as the shoe doesn't need to open wide at that point.

The first shoe came out perfectly, and I did make one modification doing the second shoe: I started from the toe, rather than the bottom of the shoe. It looks so great.
...

I swear, I’m the only 78-year old who knows how to do a hidden knot lace.

I ended up just tying the knot and cutting off the remaining laces because they were so long that if I tucked them in anywhere it would be uncomfortable, so now they just look badass and are comfy. Anyways, I'm starting high school next week and I'm pretty sure people will be like “wow, that kid is so hardcore” just because of my shoe laces haha.

I like the Hidden Knot Lacing style but the ends of the shoelaces where bugging me. The trick i found for this was tucking the shoe laces under the soul of the shoe. Just thought I'd stick my findings out there lol.

i tried your Hidden Knot method to tie my Adidas shoes and i must say i just LOVE it. it's realy great. i've been wearing Vans shoes for years now and i always wondered how people manage to do this.

Your website made the hidden knot a breeze. I was almost able to do the second shoe without looking. My 9 yr old son has received many compliments on his laces, as that is the popular way for skateboarders to wear them.

Hidden Knot lacing is awesome. It is absolutely perfect for double tongue converse all stars. And I mean perfect.

I like the way that the knots are completely hidden from view and I still find the shoes to be comfortable with no discomfort at all.

Identical lacing with a visible knot across the top.

Inside-out version, which has advantages for hiking or biking.