Ian's Shoelace Site contains all sorts of shoelace information – most of it useful, some just for fun. There's something for almost everyone!

This website is always easy to find! Search for “shoe lacing” or “shoelace knot” (or similar) in any major search engine to find Ian's Shoelace Site at or near the top of the list.

Ian's Shoelace Site has been on the Internet since Apr-2000. In the 21+ years since, many other websites have copied portions of this site, particularly the popular Shoe Lacing Methods. While there have been many legitimate articles and collaborations, there have also been many blatant copies of my website that have ripped off my diagrams and instructions without permission:

If you see another website with shoe lacing methods, chances are they originated from Ian's Shoelace Site, the original (and the best!)

Ian's Shoelace Site currently averages around 5,000 daily visitors, with occasional peaks of over 50,000 per day. 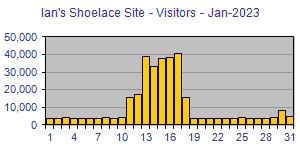 To date, the website has had more than fifty million visits!

So who are all these visitors?

In other words, Ian's Shoelace Site is for everyone: men & women, young & old, with all sorts of abilities and disabilities, from all sorts of backgrounds and from all over the world. If you wear shoes with laces (or anything else that laces up), there's bound to be something for you.

What Others Are Saying

Besides being discussed on countless websites, forums and blogs, Ian's Shoelace Site has been featured in many prestigious newspapers and magazines from around the world as well as on television and radio. Here's what some of them had to say:

Elf #1: “Can I just say on Ian, very quickly. His website's called Ian's Shoelace Site. Ian Fieggen is his name. It's worth pointing out he's made a whole site about shoelaces and he actually doesn't really overly care about shoelaces. He kind of does what we do. He's picked a subject that he wants to mine and find out stuff about and just create a place that's the – the place to go to about the knowledge, the history and so on about it. So – huge shout-out to him for doing that, he doesn't give a sh*t about shoelaces.”

Elf #1: “Yeah, he – listen – he says – he says on his site "I'm really not a knotting nut, I'm just a friendly Aussie guy trying to contribute to the Internet." ”

“I checked out the site and it is very comprehensive. How does someone first of all become a shoelace expert? 'Cause you certainly are one.”

“Professor Shoelace's real name is Ian, he runs the world's leading website about shoelaces, and from the moment he landed on our shores Professor Shoelace went to town diagnosing American shoelace problems.
...

This is the kind of man we're dealing with. He dropped so much shoelace knowledge on me it would take like six episodes to fit it all.”

(Translation): “The 46-year-old programmer has, since 1982, analyzed different methods for tying shoes, created the most comprehensive website on the topic and has published one of the standard works on the topic ("Laces: 100s of Ways to Pimp Your Kicks").”

“This is one of those seemingly trivial stories that could actually change your life. It's about a man who has a noble quest: to revolutionize how the world laces its shoes. Go ahead, laugh – but there's a good chance you're tying them wrong.”

“This is a simple yet brilliant website where the content is king. The guy featured, Ian, seriously knows how to tie his shoe laces in every which way you can think of.”

“Shoe Lacing dot com, he's got a terrific knot there, it's just a ... ffwwhhere! It's just a ffwwhhere! Yeah–and then he's got a little animation. It's worth a look, it's good, it's fun.”

“He calls himself Professor Shoelace, and yes, he is a world wide authority on the tying of shoelaces.”

“But Fieggen's also got an amazing website on which he shares how-tos and other great tips, like how to avoid the "Granny Knot" (a knot that always seems to come undone).”

“Shoelace purists – and you know who you are – will be pleased to know that all the flyest methods, from the Double Helix to the Checkerboard to the Spider Web ... (plus 100s more), are included, with illustrations.”

“Ian wasn't on the Web from the very beginning, but he found his way there pretty fast. He pitched his first page online in 2000. In 2003, he expanded to a full-fledged website. Now, seven years later, he continues to build and polish what has become one of the world's foremost collections of information, advice, and trivia about shoelaces.”

(Translation): “Here's an unrealized potential for fashion variations. A short stroll through the world of shoelaces.”

“After analyzing his daily shoelace routine, prompted by a 1982 broken-lace incident, Mr. Fieggen uncovered what he believes is the fastest method for tying laces. Ian's Shoelace Site is the comprehensive online resource born out of that quarter-century-old epiphany.”

“Yet I am still endlessly fascinated by Ian's Shoelace Site, an astonishing repository of all that you could ever want to know about said topic.”

“I went back and visited Ian's site several times and it took me a while to understand why I found this site so interesting and compelling. It wasn't because I was fascinated by knots or shoelaces. I finally decided that what I love about this site is it is an excellent example of instructional design. It is excellent because Ian offers his instruction in several different ways to appeal to people with different learning styles.”

“Recently however, we were introduced to Ian Fieggen (aka Professor Shoelace) and were humbled by his academic knowledge of this black art. The prof has created, without doubt, the best shoelace website in the universe.”

“Ian's Shoelace Site ... is the Internet's foremost resource for shoelace information, and most importantly, knot-tying techniques. The shoe-wearing world is better for it.”

“The only shoelace tying resource you'll ever need.”

“Ian Fieggen, a computer programmer and graphic designer from Melbourne, Australia, wants to change that: enter http://www.fieggen.com/shoelace, his Web site devoted to untangling the singular subject of shoelaces. And how:”

“This should be on the national curriculum, all parents should know the secret. I want it broadcast on TV. Who said everything you need to know, you learn in kindergarten? Only if your teacher has discovered Ian's Shoelace Site.”

“While the subject matter may seem mundane, Ian's obvious enthusiasm for knots and laces makes this site an absolute kick.”

“Proprietor Ian has an interesting, super-simple method for tying shoes, but if it's complexity you're after, he knows lots of ways to get yourself all knotted up.”

TIP: See also the Interviews & Articles section which contains full transcripts of many of the above articles.

Ian's Shoelace Site first came about because of the innocent perception of shoelaces, which most people regarded as “kindergarten knowledge”. Because of this, no-one had bothered to publish any serious information about them, which I discovered first hand when I searched the Internet on the topic.

As discussed in more detail on my Ian Knot History page, I began by adding a single shoelace page to my existing website. This contained my Ian Knot, the World's Fastest Shoelace Knot, plus the two other most common shoelace knots for comparison.

In the next major change, that single page was branched off into a separate, multi-paged website, into which I added other known Shoelace Knots, Lacing Methods and other related info. The resulting “Ian's Shoelace Site” was thus born, two full years before YouTube even existed!

After five years of providing the website free of charge and free of advertising, the site's layout was changed to create space into which sponsors' advertisements could be included. Hopefully this will allow me to continue providing this site freely for the thousands of daily visitors despite the steadily rising hosting costs.

NOTE: As an Amazon Associate I earn from qualifying purchases.

Ian's Shoelace Site is not a commercial website! I'm not selling shoelaces or footwear or anything else. It's basically a hobby site, through which I'm trying to contribute something worthwhile to the Internet.

Most of this website's content could be considered “Educational”, “Instructional”, or “Self-Help”. It's a mixture of traditional knowledge and original concepts, some of it well known, some of it quite obscure.

Much of the content has been compiled through years of research in libraries, magazines and over the Internet. Some of it (such as my own knots and numerous lacing patterns) have been invented by myself – though sometimes these have turned out to be be re-inventions of existing lesser-known methods. I have drawn most of the diagrams, taken most of the photographs, given names to many of the knots and lacing patterns or chosen the most appropriate names when there has been more than one conflicting name. Many other ideas and suggestions are due to Feedback from website visitors, who have also contributed numerous methods, tips and photos.

Although my website is not specifically targeted at kids and therefore contains fairly difficult words, I believe that all the content of my shoelace site is safe for kids. In other words, it's partly “Kid Friendly” and totally “Kid Safe”. It contains no coarse language, contains no “adult references”, is non-explicit, is not defamatory or offensive – you get the general idea! I'm not infallible, so please Contact Me if you find anything that you consider would best be changed or removed to make this website more “Kid Safe”.

The contents of this website are Copyright © 2000-2020 by Ian W. Fieggen. I reserve the rights to all content, including writing, text, images, sounds, videos, programming, coding, scripts, etc. contained on this website.

Amazon and the Amazon logo are trademarks of Amazon.com, Inc. or its affiliates.

Generally, I'm pretty agreeable to others passing on this knowledge by using portions of the content of this website provided that you simply credit Ian's Shoelace Site as the source or myself (Ian Fieggen) as the author. Obviously, you're welcome to print a page or two from this website to show to someone else! Should you wish to reproduce or otherwise make use of portions in your own derivative works, such as in books, magazines, etc, please Contact Me first to obtain written permission. For example, many people have been given permission to use my shoelace knot diagrams rather than drawing their own.

You're most welcome to link to Ian's Shoelace Site from your own website, blog or social media pages. If you're after linking code or specific details, such as Why to Link, How to Link, How NOT to Link, Where to Link, Reciprocal Links, etc, please see my Linking to This Site page.

I've tried to keep Ian's Shoelace Site as simple and straightforward as possible, and have kept it free of the sort of nonsense used by many other websites:

These sorts of things are often the cause of both user frustration and browser problems, and can range from annoying to invasive to downright dangerous. I don't like them, I consider them unwarranted, and I do NOT use them on my website!

In short, you should be able to browse this website in complete confidence.

Check you're not tying a “Granny Knot”, which sits crooked and comes loose.