On an average shoe with six pairs of eyelets, there are almost 2 Trillion ways to feed a shoelace through those twelve eyelets! Impossible? This page shows the maths behind that extraordinary number.

It hardly seems possible that there could be quite that many ways to feed a shoelace through twelve eyelets! So let's look at the mathematics:

In more general mathematical notation, if “n” is the total number of eyelets, then the formula for the total possible paths through those eyelets is:

This number of possible paths can be halved for those that are mirror-images of other paths. Similarly, the number can be halved again for those that follow the identical path from opposite ends. Actually, it's a bit more than half because some opposite-end duplicates have already been eliminated as mirror-image duplicates. Even so, this still results in at least 500 billion unique paths. 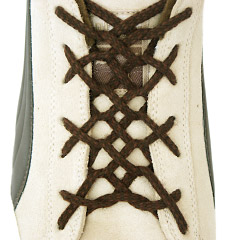 In addition to the basic mathematics of passing through the eyelets, we can multiply by the many different ways the shoelaces can be crossed or interwoven prior to passing through those eyelets (as shown at right), and multiply again if we allow the laces to either pass through any eyelet more than once or skip any eyelet, and even more if we use two or more laces per shoe. This results in almost infinite possibilities, limited mainly by the length of the shoelaces.

In the real world however, we can place some sensible constraints, such as:

So how many possible ways are there to lace a shoe with twelve eyelets if we DO take into account some or all of the above constraints? This requires far more complicated maths than the simple multiplications above. For example:

The above combinatorial equation came from research by Australian mathematician Burkard Polster, who caused a sudden worldwide surge of scientific and academic interest in the mathematics of shoelacing following the publication of an article in the respected journal “Nature” in December 2002.

Although not quoted in the Nature article, Polster's calculation for the number of real-world lacing methods for a typical shoe with 12 eyelets came to 43,200.

I'm sure that the number of Shoe Lacing Methods on this website is destined to grow as I discover more worthwhile methods from the thousands of possibilities that I haven't yet explored.

Burkard Polster's 2002 article in Nature spawned a number of articles, one of the most informative and readable of which is reproduced here on the San Francisco Chronicle's website. In Oct-2009, Burkard re-visited the subject in his Maths Masters column in The Age newspaper.

The mathematics for calculating shoelace lengths can be equally complicated.

Interactive diagram on which you can try out trillions of possible methods.